The Texas Department of Parks and Wildlife has established 3 wildlife viewing areas. Baylor County is fortunate enough to be included in the newly proposed area called “Prairies and Piney Woods”. 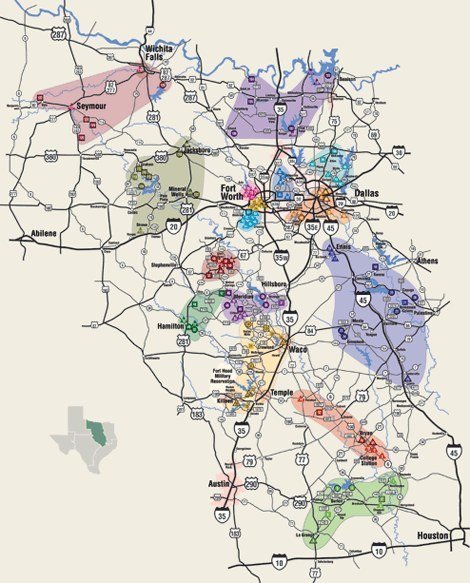 Site open for day use only.

The story goes that early settlers noticed that Seymour Creek was one of the best places for Wild Turkey anywhere along the Brazos River. Because of this, they settled here and the town of Seymour was founded. If the story is true, the residents of Seymour have done right by their turkeys and respectfully set aside 83 acres along Seymour Creek as parkland, which holds a variety of wildlife including the occasional Wild Turkey. More regular residents include nesting Blue Jays, Northern Mockingbirds, Common Grackles and Mourning Doves.

In the heat of the summer the muddy banks of the creek provide excellent habitat for Killdeer and herons. Dragonflies such as Common Whitetail, Widow Skimmer and Eastern Amberwing are common. In summer, be sure to climb the slight rise on the east side of the park and look back over the city for soaring Mississippi Kites. Also, look for the recently arrived Black-bellied Whistling Ducks, which nest in large trees around town. Visitors in October can enjoy the spectacle of migrating Monarchs, as hundreds of the butterflies cover the trees.

The Walker Family has lived, farmed and hunted thousands of acres of west Baylor County for over a hundred years. During this time they have developed an appreciation for the land and a love for its wildlife. Fifteen years ago they started Ranger Creek Ranch to share this love with others. They have made many improvements and have carefully managed the land for a wide diversity of wildlife. Their extensive system of blinds offers excellent opportunities to observe and photograph wildlife up close.

The landscape in this area of Texas can change dramatically in a very short distance, going from flat and fertile wheat fields to striking mesas and canyons in Texas’s own version of the Painted Desert. These canyons host Lark Sparrows and Roadrunners in abundance and are one of the few remaining places where seeing Texas Horned Lizards is a daily occurrence. Spring-fed ponds host dozens of dragonflies, including Eastern Pondhawks, Eastern Amberwings and Halloween Pennants. The ponds are also frequented by Mississippi Kites, which cruise overhead in search of their dragonfly prey. During the winter months, managed wetlands are seasonally flooded to attract geese and ducks in great numbers.

The history of the ranch can be seen in several old rock buildings that are nearly a century old. Ranger Creek Ranch offers a unique glimpse at one of Texas’ most striking landscapes and an opportunity to enjoy its great wildlife and hospitality.

The Porter Family Ranch encompasses over a thousand acres of farm and woodland along the banks of the Brazos River. The ponds on the ranch host hundreds of ducks and geese in the winter and a variety of wading birds in the summer. Commonly observed birds include Great and Cattle Egret, Great Blue Heron and Black-crowned Night Heron. During migration, shorebirds such as Greater Yellowlegs frequent the muddy edges of the ponds. The large open fields are filled with singing Dickcissels and the acrobatics of Scissor-tailed Flycatchers and Eastern Kingbirds. Look for Wild Turkey and listen for the characteristic whistle of Northern Bobwhite. The more open habitats attract wintering raptors, including Red-tailed Hawks and the occasional Bald or Golden Eagle.

The River Road Retreat is an outstanding retreat for the 3 R’s: rest, relaxation and rejuvenation. The site has accommodations for several couples or a large family in a house surrounded by bird feeders and situated at the heart of an extensive trail system. The retreat is surrounded by lots of Baylor County history and is located in the Round Timber community which is the oldest settlement in the county. Visitors can either explore the trails or just sit and watch quietly at the feeders as Northern Cardinals, American Robins, Painted Buntings, a variety of finches and sparrows, and Black-chinned Hummingbirds appear. The Retreat is also a haven for Pyrrhuloxia. On a rare instance, you might even catch a glimpse of a Mountain Lion. The River Road Retreat joins the Brazos River, a setting for many unique stories. Along the river, look for a variety of herons and egrets. Mammals such as Raccoons, Coyotes, and Bobcats patrol the shoreline and are most easily detected from their footprints along the riverbank. White-tailed Deer are numerous and often seen early and late in the day. Tours of the Retreat are available with the guidance and hospitality of the Hincirik-Cooper Family. Whether watching wildlife or gazing at the stars, sit back and relax. 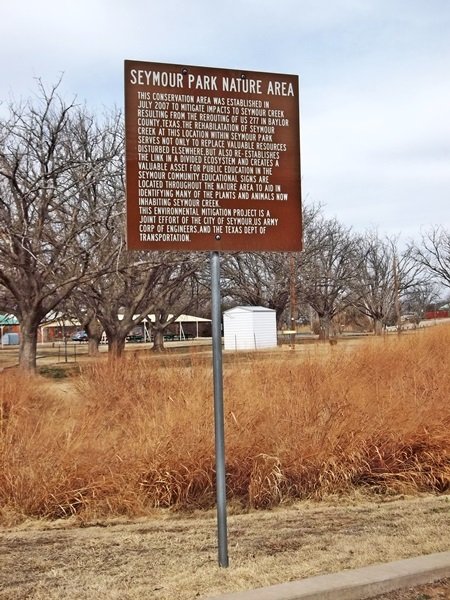 This Conservation area was established in July 2007 to mitigate impacts to Seymour Creek resulting from the rerouting of US 277 in Baylor County, Texas.  The rehabilitation of Seymour Creek at this location within Seymour Park serves not only to replace valuable resources disturbed elsewhere, but also re-establishes the link in a divided ecosystem and creates a valuable asset for the public education in the Seymour community.  Educational signs are located throughout the nature are to aid in identifying many of the plants and animals now inhabiting Seymour Creek.  This environmental mitigation project is a joint effort of the City of Seymour, US Army Corp of Engineers, and the Texas Department of Transportation.